Since 1989, the Recognized Leader in Computer Control

Recently, I reviewed Scancat Gold for Windows - SE (SCGW-SE) with the AOR AR-8200 handheld receiver [see Scanning USA, January 2000]. One of the benefits that I touted for SCGW-SE was the ability to work with scanners other than the AR-8200. Now, Computer Aided Technologies, the company that developed and markets Scancat Gold for Windows has added support for the Uniden BC-245XLT TrunkTracker II handheld. This remarkable scanner provides trunk tracking ability for Motorola and Ericsson EDACS systems in a handheld. SCGW-SE adds to that functionality and makes this a total monitoring package.

There are several packages that currently support the BC-245XLT: Radio Manager for Windows, WinScan and even some freeware. All of these have strengths and weaknesses. But Scancat Gold for Windows-SE has integrated their fine application and database with the ability to do trunktracking which gives the owner of the BC-245 some features that are top notch.

(For the purposes of this review, I am using SCGW-SE version 7.57 and please note that 'SE' stands for Surveillance Enhanced; this is the full-featured package of SCGW-SE.)

What is new about this version of SCGW-SE is the Trunker Database. When the BC-245 is selected as the receiver, a new menu item appears on the Main Menu window: Trunking Database. This data base differs from the normal ScanCat .frq database in that it contains a field for a trunk indicator. This indicator flags a channel as a trunk frequency. Also, a second pane in the Trunker Database window allows one to set up the ID's in the scan lists for the trunk system of each bank in the BC-245. Note that this database is also used for the BC-895XLT.

This information can be read from the radio, either a bank at a time (which I found worked best for me) or all 10 banks at once. The data can also be uploaded to the radio via the Load Selected Bank button. I find that this ability facilitates exchanging data between owners of the BC-245. When uploading the bank information, both frequencies and talkgroup scanlists are uploaded. When the trunked frequencies are uploaded, SCGW-SE checks for the 'T' designator (or 'TN=1' flag in the conventional database) and then displays a box to select the trunk type (Motorola Type I, Type II, EDACS, etc.) You will still need to check any special programming (such as Type I fleet maps or the offset and base frequency for UHF Motorola systems.) Also, be sure the EDACS frequencies are in LCN (logical channel number) order! 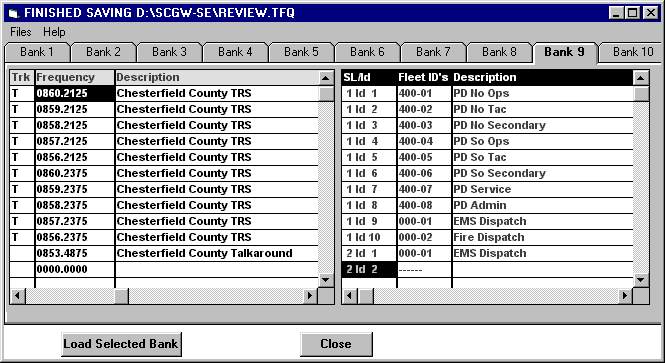 When using the 245 (or the 895) in trunktracking mode, the Cat Trunker interface is used. This window is accessed through the Trunking button on the Scanning module window when SCGW-SE is set to the BC-245XLT (or BC-895XLT). Cat Trunker provides many features for the trunking mode and duplicates the keypad control of the BC-245XLT. What is really best is the logging feature of Cat Trunker. This features allows one to log trunk IDs along with a hit counter and adds alpha tags to the trunk IDs.

I have used several other packages for the BC-245 and so far, I found SCGW-SE is the only one that offers an easy-to-setup database, logging and alpha tags. While other packages do a fine job, it is my opinion that SCGW-SE sets the standard for the others to emulate. SCGW-SE does a great job supporting the BC-245XLT's trunktracking mode. I used it with a Motorola Type I system, a Motorola Type II system and an EDACS system and it worked fine for all three.

I must comment here that it did take me two tries to get SCGW-SE working well. Being impatient, I installed the software, hooked up the 245 and jumped in. Ooops! A couple of things didn't work as expected. After pulling out the manual and sitting with the application and trying a few things, I re-initialized everything and started over. By going through the Trunker Database first, and then going to the Cat Trunker window and allowing the application to log a few IDs, things went much better. Take the time to read over the manual (at least the parts that pertain to the 245 and the trunking support) and be patient. (When all else fails, remember that the Scancat folks are a quick e-mail away or you can call to Computer Aided Technologies and speak with their tech support during business hours. Scancat's support is among the best of those I've dealt with.) I didn't find anything about Scancat's implementation of the Trunker Database or Cat Trunker that even a new user of computer-assisted monitoring technology couldn't handle. 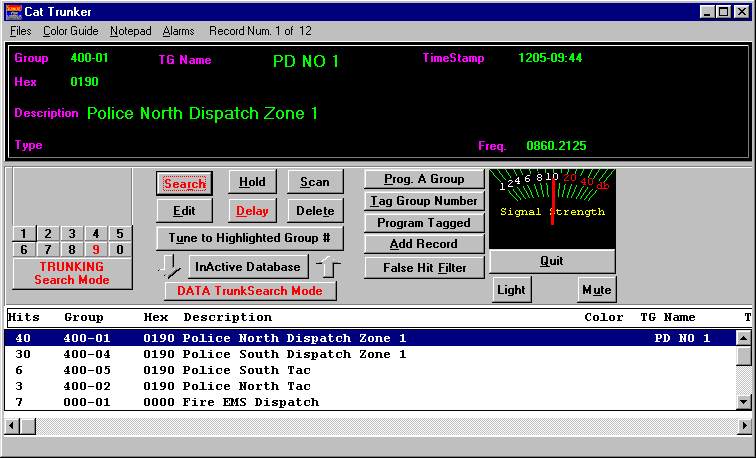 Another point I'd like to make about Cat Trunker is the layout. This window is laid out very logically. I found the window very easy to use. The buttons used for tracking are grouped together and, with three exceptions, are similar to the buttons on the 245 itself. Another group of buttons are for dealing with groups and records. Finally, there is a button called the "False Hit Filter". This button, when enabled, keeps the program from logging a talkgroup until a certain number of seconds pass. This keeps the spurious talkgroups from showing up in the log.

Of course, there is still support for conventional scanning within Scancat Gold for Windows - SE. This includes audio logging, spectrum analysis and even plain ol' scanning. Audio logging allows the user to record audio from the scanner via a soundcard to '.wav' files on the computer. This is great for traffic analysis or capturing those exciting moments of scanning we like to share with folks. Keep in mind that these '.wav' files can become very large.

The spectrum analysis function provides several features which can be used for discovering new frequencies. One nice part of this feature is that it will not only display data by signal-strength but also by number of hits. This will identify the busy frequencies quickly. The spectrum analysis feature gives the scanner a new use that really marries the power of the PC with the scaner. To me, this is one of the best features of SCGW-SE.

Scanning with SCGW-SE and the 245 is pretty straightforward. It is best to set up the files first, but this can be done pretty easily and what's more, if the data is in another format, SCGW-SE provides Scanport, an import feature that reads several different file formats, including ASCII files and CSV (comma separated variable length) files. Of course, alpha tags can be added to the frequency record and displayed while scanning.

I mentioned this in my last review of SCGW-SE, but I want to address it again. One of the best features of SCGW-SE is the excellent support that a user can get from the company. Starting with their web site (http://www.scancat.com), support is a big deal with the folks at CAT. You can call them on the phone, e-mail them, write them a letter, or use just about any other way to get in touch. I have found Jim Springer to be one of the most accessible developers and he has been a great resource of tips, tricks and insight into computer assisted monitoring. Take a look at the Scancat website and especially check out their utilities section. There are just tons of downloads, including documentation, utility applications, demos and more.

All in all, I think Scancat Gold for Windows - SE is a definite "must-have" if one wishes to make use of the computer port on the Uniden BC-245XLT. This is one program that really makes full use of all the 245 offers and SCGW-SE combines functionality not available in any other single application. This gives the user who wants a "does-it-all" application a lot of power and flexibility.

Scancat Gold for Windows - SE is available from Computer Aided Technologies for $159.95 and shipping. If you feel you don't need the SE version, it costs $99.95. CAT also sells CD-ROMs with frequency information (Percon's Spectrum and the Betty Bearcat CDs.) They also have other goodies, including interfaces, antenna multicouplers and more. Again, take a look at their web site or write them for a copy of their catalog.


Again, thanks to Alex Blaha for assigning this review to me and a big thank you to Jim Springer for his assistance and patience answering my questions.